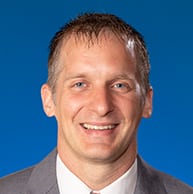 Dr. Meyer brings to Bethlehem College & Seminary a wide range of teaching, writing, preaching, missions, and pastoral experience. He has a passion to proclaim the whole counsel of God in both the church and the academy for the glory of God. He longs to see the nations worship God, who alone is worthy of worship. The mission statement of Bethlehem is the mission statement of His life: to spread a passion for the supremacy of God in all things for the joy of all peoples.

Meyer has authored a book on the difference in Paul between the old covenant and the new covenant, entitled The End of the Law: Mosaic Covenant in Pauline Theology (B & H Academic, 2009), contributed the chapter on the prison epistles in The Cradle, the Cross, and the Crown: An Introduction to the New Testament (B & H Academic, 2009), and has written a biblical and practical theology of preaching (Crossway, 2013).

Prior to coming to Bethlehem, Meyer was the Dean of Chapel and Assistant Professor of New Testament and Greek at Louisiana College in Pineville, LA from 2006-2009. Meyer also taught New Testament for the Spring 2010 semester at the Evangelical Theological College in Addis Ababa, Ethiopia. Before this, he served as the pastor of Orville Baptist Church while completing his Ph.D. in New Testament under Thomas R. Schreiner at The Southern Baptist Theological Seminary in Louisville, KY.

Jason and his wife, Cara, have been married since 1999, which have been the best years of their lives. God has blessed them with two daughters, Gracie and Allie, and two boys, Jonathan and David, adopted from Ethiopia. As a family, the Meyers enjoy camping, hiking, fishing, sports, and music.