After my conversion to Christ in 1994, I gravitated toward books about biblical studies, hermeneutics, and theology, especially after my wife, Susan, and I joined Bethlehem Baptist Church in 1998. God used John Piper’s Let the Nations Be Glad! and our participation as members at Bethlehem to shape in us a calling to educate others worldwide in the biblical motivation for cross-cultural ministry, especially to the unreached people groups of the world. That was my main objective during five wonderful semesters of teaching various theology courses at the Cameroon Baptist Theological Seminary from February 2003 to July 2005. Feeling compelled to bring sound doctrine and theological principles to bear on matters of pastoral ministry and missions strategy, I completed an M.Div. degree in 2008 with a concentration in biblical and theological studies.

By that time the Lord had led Susan and me to a doctoral program jointly offered by Gordon-Conwell Theological Seminary and Boston University that is focused on the study of missions. Though I had the privilege of being taught and mentored for three years by one of the world’s leading historians of missions and global Christianity at Boston University, I originally intended to major in the theological bases for and shape of missions. One year into the program, my primary supervising advisor at Gordon-Conwell, the director of the missions department there, took the job as president of a different institution, and I was offered a church historian as his replacement. By that time, too, the Lord had turned me on to a dissertation topic concerning the cross-cultural ministry of New England Puritans. Little did I know, with two historians now as my advisors, God was preparing me for the “dream job” of being the professor of both mission studies and church history at Bethlehem College & Seminary.

God brought things full circle in a sense. He had given me an interest in history and other cultures while still a young, unregenerate boy. Most of my elective courses at the University of Illinois while seeking the Truth as an undergrad were courses in history. My favorite sermon series by John Piper had always been “Men of Whom the World Was Not Worthy,” biographical sketches he originally prepared for the annual Bethlehem Conference for Pastors.

At Bethlehem College & Seminary I am surrounded by colleagues who are top-notch Bible scholars (who keep abreast of the latest literature I wish I had time to read) and who share with me the most important theological convictions. Those are two of the many reasons I wanted to teach here. My colleagues are a tremendous personal and professional resource, bringing their convictions and expertise to bear not only in their classrooms and around our (proverbial) faculty water-cooler but also in shaping the ongoing conversation and theological ethos of our student body and broader campus community.

On the other hand, all of the professors at Bethlehem College & Seminary share a passion for God’s glory in Christ to be manifest among every tribe and tongue on earth. I don’t bear the weight of alone waving the banner for world missions. What a relief and joy! But God has given me the privilege and pleasure of connecting some dots that others don’t typically get to. Here are four ways that biblical studies, church history, and cross-cultural missions intersect in significant ways for faithful Christian discipleship “among the nations” (as I like to say) in the twenty-first century.

First, the study of church history is a mediating discipline between biblical studies and cross-cultural ministry. God has revealed the meaning of history by way of the biblical narrative. The risen Christ is now unrolling the scroll of history and building his church while preparing an eternal place for a bride redeemed from every people and nation. Our doxological study of church history is focused on that cross-cultural expansion of the kingdom of God’s Son. Knowing the outcome of the canonical story and the trajectory of world history ought to compel a person to be involved in cross-cultural ministry to the unreached and unengaged ethnoi of the planet.

Second, I believe there is nothing new under the sun regarding topics in mission studies. Every contemporary controversial issue has a historical precedent or corollary, from “business as mission” to ministry to pre-literate people to fulfillment theology and so-called “insider movements” to urbanization, globalization, and other matters of contextualization. We should consider these issues from a perspective that is primarily biblical-theological rather than merely pragmatic. We are wise to also learn from the thinking and experiences of those who have lived and ventured forth before us in cross-cultural ministry.

Third, training in cross-cultural ministry is preparation for being a faithful and reproducing disciple of Christ in an American culture becoming more and more like that into which the church was birthed: the pre-Constantinian and pluralistic Roman empire that was predominantly unfamiliar with (and misinformed about) the Christian faith. We can learn from and be inspired by the ways the church in other eras—and in other global contexts today—has applied the Word to their respective situations. In addition, understanding the history of our own culture is key to understanding the anti-biblical values and worldview assumptions that shape and drive the unbelievers around us.

Fourth, all Christians today should be equipped to both engage Muslims winsomely, with an intelligible evangelistic witness to Christ and loving deeds in his name, as well as explain Muslims to our other neighbors who are often more annoyed or confused by the growing presence and influence of Islam in the West. Both our seminary course, “The Local Church and Missions,” and the undergraduate degree concentration in cross-cultural ministry aim to equip our students for that, among many other things.

The diverse metropolitan area of Minneapolis–St. Paul is an amazing place in which to study the myriad of connections between God’s breathed-out Word and his breath-taking world. Please pray for our students as they attempt to be living points of contact between lost persons and the robust community of faith that is Bethlehem Baptist Church and other like-minded churches here.

Thank you for your support. It is a delight to partner with you in my dream job! For God’s global glory in Christ and his church and the joy of his Spirit-dwelt people in him,

Dieudonné Tamfu’s Message at Chapel,
October 29, 2015: “A Name Better Than Sons and Daughters” 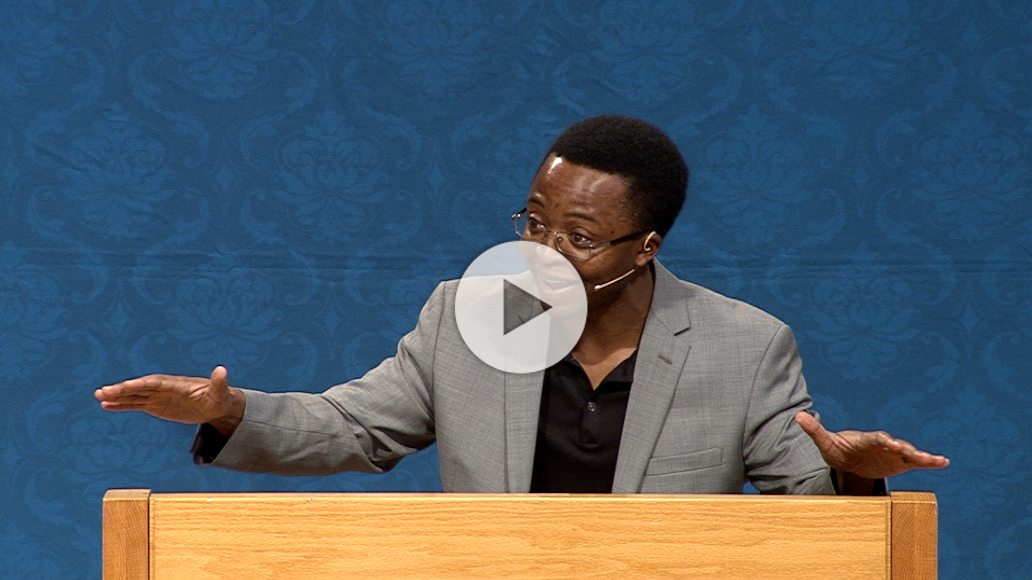 1. That the Lord will place more of our students in ongoing, supervised, fruitful cross-cultural ministry here in the Twin Cities, especially among Somalis, Native Americans, and the many Buddhist refugees.

2. That the Lord will continue to mature the synergistic partnership between Bethlehem College & Seminary and Bethlehem Baptist Church’s Global Outreach Department in ways that better equip our students for ministry and make the church a blessing to even more unreached people groups and underserved places the world over.

3. That our Bible-saturated graduates will someday be a healthy influence in many Christian circles by contributing a theological perspective on issues pertaining to missionary aims and strategies in their respective roles as local church pastors, professors, missions committee members, missionaries on church planting teams, and perhaps even missions agency leadership.