In addition to serving as the Director of Admissions here at Bethlehem, I’m also working on a Master’s of Theology (Th.M.) degree, studying the educational efforts of 19th century Baptists. This month I’ve taken a deep dive into the Newton Theological Institution, founded in 1825 as the first Baptist seminary in the U.S. and for many years one of the most important institutions in American Baptist life. Along the way, I’ve been struck by a number of parallels in the work of theological education both then and now, even though we are separated by over 150 years.

One striking parallel is the emphasis on the biblical languages. The emphasis of our Master’s of Divinity (M.Div.) program is intense whole-Bible exegesis in the original languages, and this is what Baptists were doing in the 1800s, too.

At Bethlehem, we exist to spread a passion for the supremacy of God in all things for the joy of all peoples through Jesus Christ, and as Bethlehem’s annual “Global Focus Week” has kicked off, we remember how the cause of global missions is embedded in our DNA here. This was true of the 19th century Baptist as well in the age of Adoniram Judson. Over the years a stream of foreign missionaries would flow forth from Newton:

These are some core similarities. What about contrasts? One interesting difference is in the area of marketing and recruiting. In 1851, the seminary recruited by publishing notices in the Baptist newspaper:

Today we don’t communicate with the churches via newspaper (though check your mailbox soon for the forthcoming Fall 2020 Serious Joy Newsletter). Instead, we rely on modern forms of communication, like this email. We don’t require a “certificate” from applicants’ home churches; instead we ask for electronic reference forms filled in by their pastor.

However, the tendency to procrastinate has ever remained the same, and we join our 19th century brothers by requesting those intending to enter Bethlehem’s M.Div. program for Fall 2021 to apply promptly. The deadline is coming up soon, on December 1: bcsmn.edu/apply.

So we advertise and we recruit for our programs, but what ultimately is behind enrollment? Is it our own efforts or is it God’s? 19th century Baptists wrestled with the same questions. In the 1840s and 50s they had experienced a decline in the number of students enrolling in the seminary, and it provoked much discussion about a proper response. One writer listed several factors, including the need for revival and the need for prayer. What does revival have to do with seminary enrollment? During the 19th century, “revivals of religion” were seen when significant numbers of people were converted, and many of them would then feel a strong impulse to go into the ministry or to the mission field. One way to aim (indirectly) at seminary enrollment was to cry out to God to work among his people more generally.

Who could look at the state of evangelical churches in America in 2020 and not feel our deep need for God to work powerfully among us by his Spirit, in a way that could even be called a revival of religion in our midst?

This writer’s ultimate reason, though, related to prayer. We have a special command from Christ to “pray earnestly to the Lord of the harvest to send out laborers into his harvest,” (Matthew 9:38), and yet he feared that Baptists seemed to have “more confidence in almost any other method than that of prayer.” 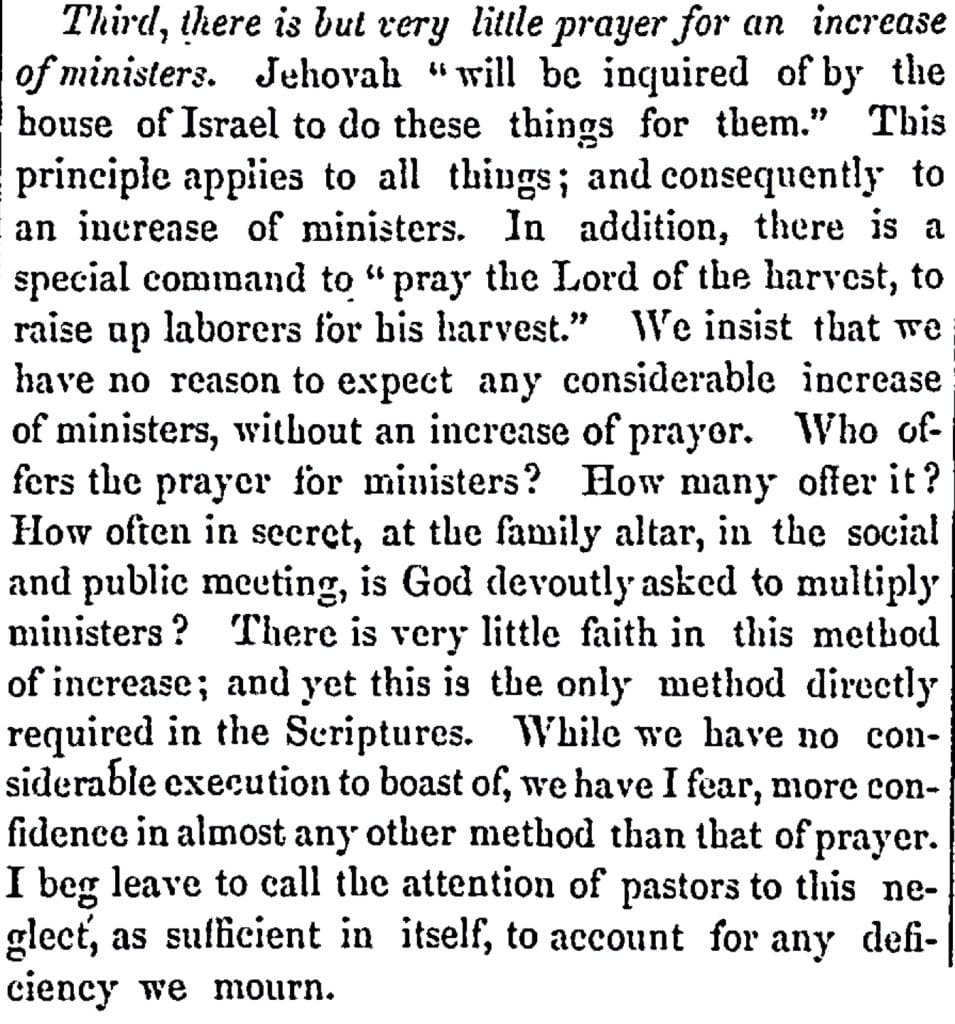 One hundred and sixty-five years later we are in the same position, dependent on God to call men to the ministry. No matter how well we structure our program, or fill the library, or hire faculty, this is not sufficient. What we need, in the first instance, is a number of men, called of God to the work of the ministry, in answer to the prayers of his people. So would you join me—and these Baptists from generations long before—in prayer? Pray for the church in America, for God to work in our midst by his Spirit. Pray that he would save many people in this country, and pray that he would raise up and send forth more laborers into his harvest field.