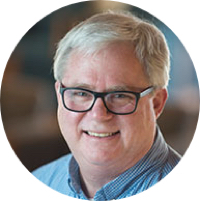 (MINNEAPOLIS, MN) – – – May 31, 2019 – – – Bethlehem College & Seminary announced today that Dr. David Howard has been named Visiting Professor of Old Testament. He will assume his faculty position in August of this year, teaching Old Testament and Hebrew courses in the M.Div and M.A. programs, and working with Th.M. research students.

“We regard it as yet another of the many benevolences that our great God has supplied to Bethlehem College & Seminary a scholar of David Howard’s caliber and reputation in this academic season,” said Bethlehem president Dr. Timothy C. Tomlinson. “His life and distinguished career embody a treasuring of Christ above all, a reverence for God’s Word, and a hope for the nations, all of which we earnestly seek to instill in the men and women who study here only too briefly,” he added.

Howard completed his Ph.D. at the University of Michigan in Near Eastern Studies. He is currently Professor of Old Testament Emeritus at Bethel Seminary, but has also taught at Trinity Evangelical Divinity, New Orleans Theological Seminary, and Gateway Seminary. He served as President of the Evangelical Theological Society in 2003, where his inaugural address was entitled “Surprised by Joy: Joy in the Christian Life and in Christian Scholarship.” He is also a member of the Institute for Biblical Research and the Society of Biblical Literature. He is the author of seven books including three on the Psalms and a commentary of Joshua.

In June of 2015, Howard authored a commentary for the Wall Street Journal entitled “Intrepid Missionary,” a tribute to his “Aunt Betty”—Elisabeth Elliot, his father’s sister. He wrote that her “missionary work and writings inspired hundreds of thousands of Christians to live lives of faith and obedience to God, and led thousands to bring the gospel to people in countries around the world.” The urging of the Holy Spirit and his extended family’s missional influence have led Howard to devote many years to training church leaders in Romania, Southeast Asia, and elsewhere.

Dr. Howard and his wife, Jan, are members of Bethlehem Baptist Church, where Bethlehem College & Seminary is church-based. They have two grown daughters and three grandchildren.

Bethlehem College & Seminary offers graduate and undergraduate degree programs on its main campus in Minneapolis and at extension sites in Memphis, Tennessee and Yaoundé, Cameroon. Founded in 2009, the school emerged from the ministry of Bethlehem Baptist Church during the pastorate of Dr. John Piper, who now serves as the school’s chancellor. Bethlehem College & Seminary is accredited by the Association for Biblical Higher Education.